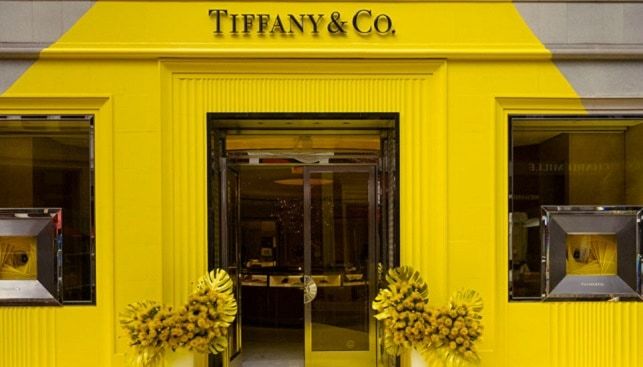 (Y)ello, Tiffany!: Is Yellow the New Blue for the American Jeweler?

It was supposed to be an April Fool’s Day joke. A post on the official Instagram account of Tiffany & Co. (@tiffanyandco) announced the american jewellery giant’s new “house” color: #TiffanyYellow. As expected, the internet went into a frenzy. Within mere hours, the post had more than 500,000 likes.

It had to be a joke, right? Who in their right minds would try to change the official, trademarked, robin’s egg Tiffany Blue!?

Thankfully, it was. The robin’s egg color returned to Tiffany’s official brand channels the very next day but the effects of the joke lingered. The massive success triggered a viral response. However, as it turned out, Tiffany Yellow is indeed a new house color. It was chosen by the brand for a weekend pop-up installation at its Beverly Hills store on Rodeo Drive. The store was redecorated with yellow furniture, fixtures, even boxes and bags to showcase a temporary collection of yellow diamond jewelry including the 130 carat “Tiffany Yellow” diamond. The exterior of the store was painted with large yellows, and even the flowers decorated at the entrance were in the same yellow. Everyone who saw this couldn’t help but feel bright and fresh. Upon entering, the entire space felt bright, vigorously vital, high-end and fashionable. There was also a “Yellow Diamond Cafe” on site showcasing sunny treats like ginger turmeric lattes, lemon soda and honeycomb ice cream. The quirky, experiential pop-up included an exhibit of loose yellow diamonds, photo booths and virtual try-on opportunities.

This April Fool’s Day joke and pop-up was spearheaded by Alexandre Arnault, the ​​son of LVMH CEO Bernard Arnault and Tiffany’s new executive vice president of communications and products. Furthermore, Tiffany says that the yellow color will travel to a few of its select stores across the world in the coming year. Interestingly, Anthony Ledru was appointed as the new Tiffany & Co. CEO. Having worked as the brand’s North American Senior Vice President before leaving to work for LVMH 6 years ago, he will prove to be a huge asset for the group as they work towards revitalizing the brand under them. Ledru brings with him a deep understanding of the brand’s grand traditions, what works for them and what doesn’t, along with what’s reaching today’s young, social media savvy shoppers across a wider spectrum. Together the two of them want to “focus on advertising campaigns and luring young customers.”

This is just one of the many controversial tones set for the brand by the new owners LVMH Moët Hennessy Louis Vuitton. The group is looking to spend the next few years transforming Tiffany from a corporate brand to an edgy global player in luxury and fashion.

Why only the color Yellow, though?

Although Tiffany is recognized by its Tiffany Blue, Yellow has a significant meaning for the brand. Back in 1877, when colored diamonds were still underrated, a yellow diamond originating from the Kimberley Mine in South Africa was bought by Charles Tiffany, the founder of Tiffany, for about 200 million yuan.

This rough, yellow diamond has been inlaid and designed by him and gemologists many times. The never before seen diamond is by far the biggest diamond found in the world, called the "King of Diamonds". It has become a treasure of the Tiffany world. Historically, only 4 people in the world have worn it.

Because it is extremely precious, Charles Tiffany decided that this diamond will never be sold, and will only be displayed in the flagship store for viewing. As such, how can this be missing from the yellow-themed pop-up store, right? And with the virtual-wearing technology available at the store, customers can try this 128.54 carat diamond on themselves even if they can’t afford it!

Nevertheless, some industry experts have different opinions. Color-expert Leslie Harrington, executive director of the Color Association, told Forbes, ““There were lots of different colors they could have chosen from, but if you look at the color wheel, this yellow is almost exactly opposite blue. It is a color with maximum visibility, whether in print or online, and maximum shock value. If you want to signal you are doing something different, you might as well do the exact opposite.”

A change of color for Tiffany, much more than any of its other brand assets, is what is going to garner maximum attention and create maximum shock value. Besides being the exact opposite of blue, yellow is also known to invoke feelings of ife, vitality, optimism and hope after the pandemic cloud the world has been under in the past year. With it, they also seem to want to attract a younger generation of luxury consumers who look for relevance along with heritage in luxury brands.

Is incorporating yellow in the long-term strategy for Tiffany & Co. a good decision?

While the color yellow has proven to be very popular and exciting amongst Gen Zers, many professionals have expressed concerns about it. According to Jing Daily, Sally Maier Yip, managing director for the Chinese PR & Marketing agency 11K Consulting said, “It’s not a wise decision to dilute that iconic heritage image of Tiffany, as this is what Tiffany is known for, and that is why people are buying it,”. Thus, making a complete transformation of the logo color is highly risky for the brand.

For luxury brands, it is very important that they uphold their heritage and legacy. As much as the young consumers love change, they have a deep affinity for the past traditions and culture which they’ve grown up listening to and aspiring for.

One of the key markets Tiffany is looking to grow in is Mainland China. Right now, Tiffany is the consumers’ go to jeweller in China, second only to Cartier. In the coming future, the brand will need to develop higher offerings and retain its aura of exclusivity to attract local high net worth consumers because, in the long term, cheaper products might harm the brand’s prestigious positioning. China is expected to grow its millionaire count by more than double and the middle class by almost half in the next five years, according to HSBC, thereby increasing the brand’s customer base. It will therefore need to up it’s game to cater to them successfully.

Creating a temporary buzz, while a good idea to attract a new demographic, is not enough to retain Tiffany’s prestigious positioning. And with access to LVMH’s resources and expertise, we can expect to see Tiffany enter new product categories or maybe its favorite: cross-brand collaborations! In a video message to employees, chairman & CEO of LVMH, Bernard Arnault, confirmed this when he said: “We will [also] prioritize Tiffany’s long-term desirability over short-term constraints.”

A more pressing concern for Tiffany is how it lacks a signature product. The Blue Tiffany box is much more recognizable than any of its products. This could be a good direction for change under LVMH since ideally, a brand’s packaging should never be more eye-catching than its products. These statement pieces will help Tiffany & Co. create brand recognition without the boxes as well, acquire new buyers and generate more emotional responses. While creating such pieces can be time consuming and require extraordinary marketing efforts, it will definitely be worth it in the long term.

Another thing the luxury industry is looking at in the light of these post-pandemic times is to “facilitate better retail experiences” to engage customers and bring them back to the physical stores via “engaging and creative in-store experience”. As of right now, however, Tiffany seems to be taking this route.

LVMH did what no one else has been able to do in decades. Touched the untouchable Tiffany Blue! No change could have announced this change in management more prominently than this. Especially given their history of playing with brand identity and icons. Remember when Marc Jacobs joined Louis Vuitton in 1997 as its creative director and gave its iconic logo a color makeover? Updating the classic brown logo with white, pink, blue, purple and yellow color washes.

Playing with its colors is something Tiffany would have never, ever done by itself before. LVMH, on the other hand, doesn’t have a problem experimenting with colors. They’ll play with the Tiffany Yellow for a while, get the buzz going to appeal to a younger clientele, make its presence felt on social media and change its image from being old and dusty to bold and young.

Having said that, Tiffany’s first marketing campaign under LVMH, “Not Your Mother’s Tiffany”, might have angered some of its most loyal customers. Specially moms! It was difficult to find a lot of people online who liked this campaign. Growth Marketer Rachel ten Brink even tweeted, “Dissing your current customers won’t make new ones love you”. One instagrammer, called TiffanyBlueSue, commented, “I guess me, a mother, doesn’t need to buy anymore now that it’s insulting the generations that brought Tiffany to its height”.

Another surprising move by the group came when they stopped running Tiffany’s famed page A3 ads in the New York Times dating back to 1896. For over a century Tiffany has occupied the top right-hand corner of page A3 in the print edition of the New York Times. This came out of young Arnault’s desire to make changes in the brand’s advertising strategy.

There are others who believe that such bold moves by LVMH come from experience and belief that old, existing customers stop complaining when they see new ones considering the brand. We tend to agree. Change is hard to accept and affluent, regular luxury consumers tend to be sensitive when it comes to how brands cater to them. They are used to receiving special treatment, therefore a shock like this makes them uncomfortable. But, what matters most from a brand’s perspective is to stand their ground. LVMH is trying to target newer, younger customers for Tiffany. It is visible throughout their strategies (consider Tiffany’s collaboration with brands like Supreme). This does not mean that it will forget its old clients. The communication and conversations have changed a bit but with time, all will fall in place as acceptance takes over.