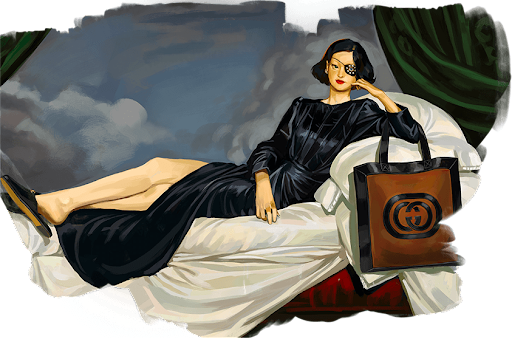 The (Commercial) Romance Of Art And Luxury

Elsa Shiaparelli, Marc Jacobs, Christian Dior, Alexander McQueen, Yves Saint Laurent. What is the first thing that comes to your mind when you hear these names? Luxury. And what do these designers have in common? Their love for art and its influence on their life and work. What started as a collaboration in the post-war world of the 20th century (here’s eyeing you Elsa Shiaparelli and Salvatore Dali!), has turned into a full-fledged love affair that’s still going strong, almost a quarter of a century into the 21st.

A Romance Through The Centuries

Both art and luxury have a lot in common. For one, they both have their roots set in expressionism. They can both be used to identify and mark the time based on their individualistic features. Art historians have used clothing in a painting to date the work of art for ages! Art and luxury have always invested in each other. Starting with the infamous collaboration between Elsa Shiaparelli and Salvatore Dali (1937) for the Lobster Dress and the Shoe Hat. The fashion houses of today have followed suit with collaborations but this time, not just for their collections.

Luxury has had a long standing association with art and artists. They look towards them for creative inspiration, so much so that a lot of luxury brands have started inviting street artists for collaboration on design and customizations as well. And studies have proved that these have worked in their favor. These associations have led to brands being perceived as more luxurious by their audiences, creating a point of difference and exclusivity in their offerings. Thus legitimizing the high prices. But wait, is this influence limited to products and collections only? Certainly not! Since the Renaissance, artists like Jacopo Bellini and Antonio Pisanello, have been known for not only depicting fashion in their paintings, but also for creating costume models, textile patterns and embroidery inspired by art. In the present times, you will see brands collaborate with art on all fronts including textile design, space design, marketing materials, museums and galleries, and even branding collaterals like logos and packaging (here’s eyeing the controversial- yet [now] highly successful- Burberry logo redesign).

Having gone beyond drawing inspiration, many famed designers have used art as a means of creative expression. A lot of the work we see by these fashion and luxury houses actually comes from the influence art has had on the designers personally. Designers such as Mugler, Jacobs and Lagerfeld are known for their inclination towards art and for choreographing their runway shows inspired by music and paintings. Apart from fine arts, performance arts has inspired brands profoundly across various aspects such as window displays to advertisements to in-store exhibits and runway shows. A perfect example of this can be the Hermès window display in Japan for its collaboration with Apple Watch, in 2015. Hermès commissioned the Danish studio GamFratesi for the job who reinterpreted in wire a set of animal drawings by the wildlife artist Robert Dallet who himself had a long standing collaboration with the brand.

However, art is subjective. What one might consider art, the other might not. Specially today, when there has been such an overflow of information online about virtually everything. Social media platforms like Instagram, Pinterest, Facebook and Twitter have so much information and detailed visuals available online that everyone has become an “art scholar”. While this is a good way of promoting art and culture amongst the tech-savvy, data driven generations, this audience is not always kind. Nonetheless, these changing demographics have caused luxury brands and heritage houses to invest in new ways of advertising and collaborations. Take for example Gucci’s Instagram campaigns Gucci Hallucinations and #GucciGram. Initially not appreciated and caused worries of diminished brand value due to dilution and brand’s association with memes and cheap amusement. However, they turned out to be some of the most interactive, successful campaigns in the history of the brand.

The Commercialization of The Romance

In the postwar era of the 20-th century, the worlds of art, fashion and design realized that they need to give decorative arts a function. People have given the perceived value of a product greater importance than its utility for far too long. Hence, they started intermingling more to exchange ideas. And thus came about events such as the Monza Biennale expos (1923 - 1930) and Milan Triennale expos (from 1933 on).

An increasing trend observed these days has been art exhibitions and fashion exhibitions or even full-fledged art galleries. Luxury brands collaborate and include contemporary art in their collections as a way to build customer based brand equity by means of customer associations and engagements.

Another sees luxury brands offering an immersive art experience outside the physical, commercial brand spaces as a way for brands to engage with their customers by triggering their emotions and need for artistic experiences, leading to a two-way conversation. They capture them online via platforms such as Burberry’s ‘Art Of The Trench’ or offline via brand cafes such as Le Cafe V by Louis Vuitton, or art museums & galleries. A modern contemporary example of this functionality and intermingling could be the Aston Martin Residences which will have a permanent art gallery on the 52nd floor to showcase works of a new artist every 2 months.

But brands these days don’t just want to be perceived as trend-setters. They want to be more. They want to be considered amongst the ranks of culture scholars. And this works both ways. Take for example The Victoria & Albert Museum, London that hosted the exhibit Undressed: A Brief History of Underwear (2017) focusing on the evolution of undergarments from the 18th century to now, displaying pieces from Stella McCartney, Paul Smith, etc. Or the exhibit Balenciaga: Shaping Fashion (2017) celebrating the works of the eponymous couturier. Like old love-struck lovers, art and luxury have always inspired each other. Fashion X Art as a branding strategy is used to elevate the perceived value of a product and turn it into a collector's piece. This collaboration makes the brand look more cultured and serves as a way for the consumers to showcase their “superior taste” and “knowledge”.

Given the commercial power of Luxury, and its popularity amongst masses, it can be used to create so much good in the world. Art and luxury brought together, and put to good use, can become such powerful tools for expression and learning. Bringing people together, helping them share ideas and build communities by means of common interests and bond-building. By helping people get acquainted with one, we can help them build interest in another. Luxury items with visual artistic elements (LIVAE) have the power to provoke interest in art and create educational value for the creations as well as people. Maybe Prada understood this earlier than anyone else when it launched its Accademia Dei Bambini program for children where experts from fields such as physics and maths try to explain difficult concepts in their lectures using art.

The Strategic Appeal Of The Romance

The power of art and luxury collaboration has made itself very prominent over the last decade. To the point that it has gone beyond fashion. Luxury is a way of life for most people and intermingles with different aspects of it. Apart from conventional artists, designers themselves have forayed into streams not directly related to designing clothes but have expanded their horizons to include gigs that are still closely related to designing and creativity. Collaborations such as between Weyves Yacht and Mugler (2008) and Elie Saab (2010) to design the interiors and exteriors of the boat. Or Hermès’s 2008 collaboration with French smart car label Como to create 10 versions of the Smart Fortwo Toile H completed with colored leather upholstery and saddle-stitched steering wheels. And again in 2013 when Hermès created crocodile leather seats, for several Hyundai Equus models to be exhibited in Seoul.

Luxury and art collaboration is a great way for brands to create value in the minds of their consumers and audiences. LIVAE is not only appealing for its symbolic value but also for the emotional value it creates in the minds of its consumers. Emotional value which promotes perceived value, brand loyalty and brand image amongst brand connoisseurs. To that end, collaboration with modern artists has another ulterior motive for brands. It indicates that a brand is evolving and keeping up with the new generations and not standing still, lost in time. One does not need an arts degree to appreciate an artistic collaboration of any sort. There’s a natural intuitive attraction for people drawn to arts who appreciate such collaborations. Because luxury is about so much more than just money. It is about creating value, evoking emotions and appreciating arts/artists and their craft.

This romance between art and luxury is a two-way street. While artists have depended on fashion houses and luxury designers to give them complete creative liberty while enjoying commercial success, the luxury houses have also time and again resorted to art and artists for inspiration and brand revival. But not all experiments are successful. For every successful campaign, there comes at least ten others that failed. Yet, pretty much like every success story out there, we only hear about the successes and seldom about the failures.

Collaboration between art and luxury has gone beyond mere creative innovations. It has marked the way for a new kind of luxury branding. And albeit touching, this kind does not come cheap. Demanding huge amounts of investments from the groups, investments that these groups cannot always afford, despite their rich heritage and brand image. However, it still hasn’t stopped them from indulging in these practices. And we may sit back and hold on tight because- it is not going anywhere, anytime soon!